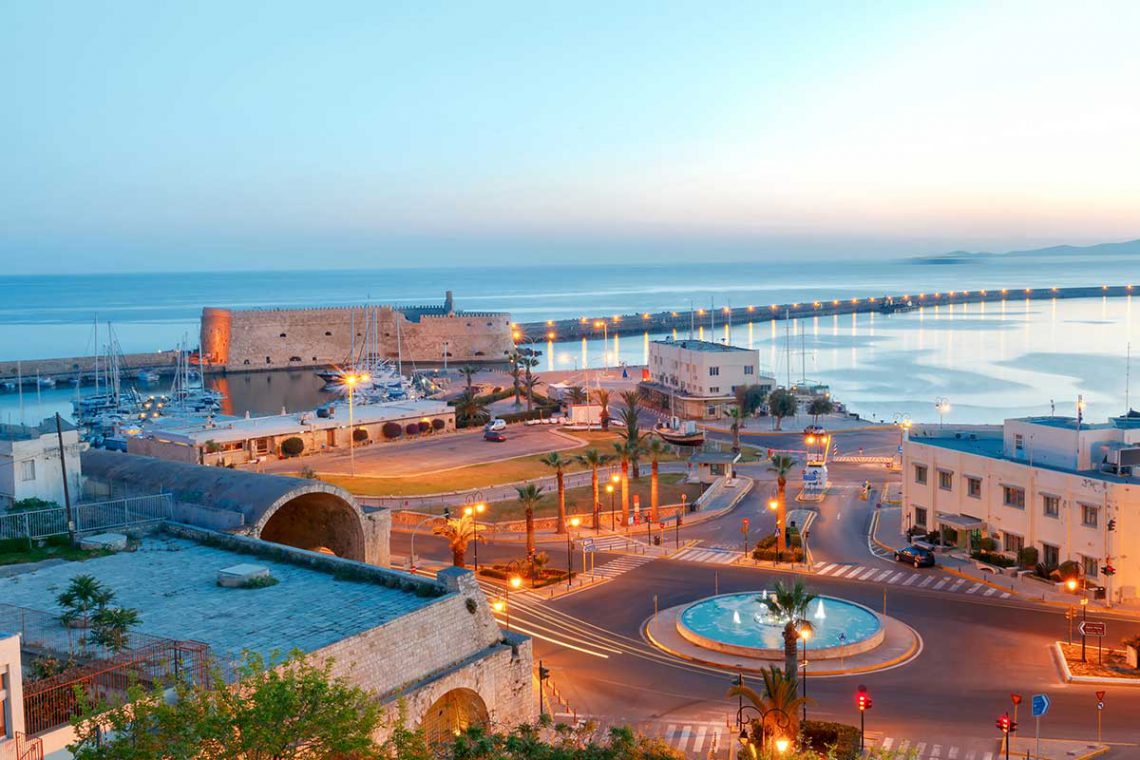 Heraklion in a day: 5 highlights of Crete’s biggest city

Not as picturesque and touristic as Rethymno and Chania, but still a lively modern city with lots of attractions, Heraklion, Crete’s capital is definitely worth a visit. We picked 5 of the city’s highlights to give you some serious reasons for a one-day trip to Heraklion. 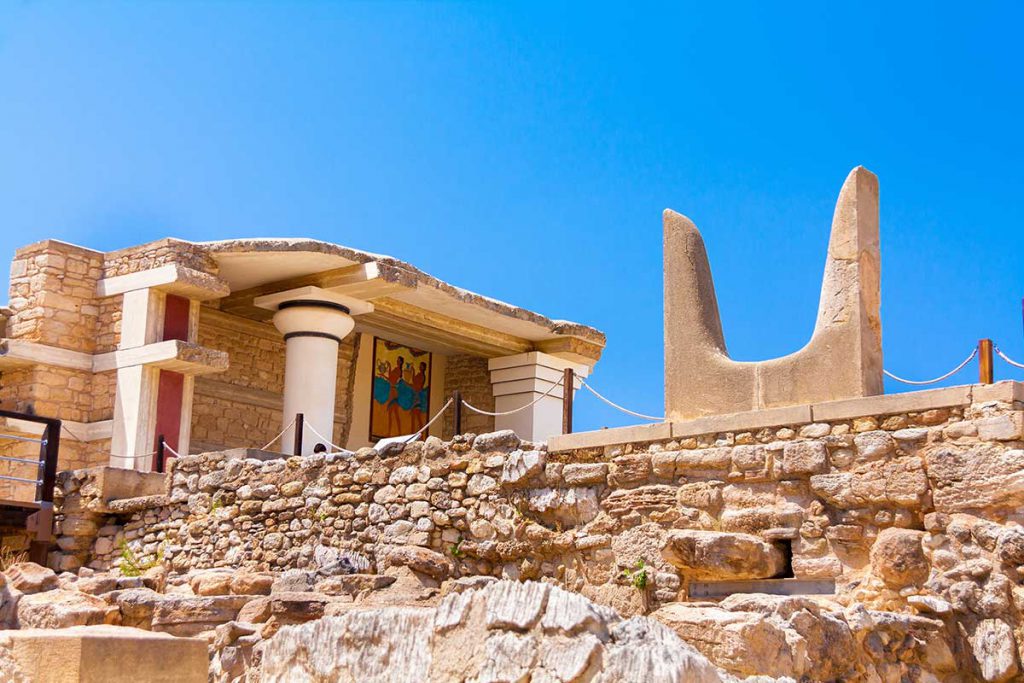 The Minoan Palace of Knossos, Crete’s most prominent and visited archaeological site is situated 5 km southeast of Heraklion. The seat of almighty King Minos was the centre of the Minoan Civilization that flourished on the island from c. 3000 BC to c. 1450 BC until finally ending around 1100 BC. The myth of Minotaur and the Labyrinth was born here, because of the palace’s maze-like layout. What you see today is partly Sir Arthur Evans’ reconstructions, but you can get a great idea of how advanced this ancient civilization was: the multi-storey palace consisted of 1.300 rooms, had grand staircases, a throne room, elegant frescoes, lustral basins, an imposing throne room, courtyards, a theatre, large storerooms, etc.

After visiting Knossos complete your initiation to the wonders of the Minoan Civilization by visiting the Archaeological Museum of Heraklion, situated in the city centre.
Housed in an awarded Bauhaus building, the Archaeological Museum is home to the biggest Minoan collection in the world. You don’t have to be a history buff to be astonished by the masterpieces of the Minoan art: delicate pottery, elaborately carved stone objects, tiny seals, small sculpture, and amazing wall-paintings, discovered in Minoan palaces, mansions, settlements, funerary monuments, sanctuaries, and caves.
After this colourful time-travel, take a break at the Museum’s verdant garden before getting to explore the rest of the city.

Heraklion’s old harbor denotes the city’s glorious past during the Venetian era. Take a stroll through the imposing arcade of the Arsenali Nuovi and right next to the Arsenali Vecchi and then head to Koules, Heraklion’s most iconic landmark. The fortress, known as “Rocca a Mare” during the Venetian occupation, was part of the fortification of the city of Candia (Heraklion’s Venetian name) and the ruler of the port. Its construction started in 1525 and completed in 1540. After extensive restoration in recent years, the fortress is operating as a museum. In its halls, you will see Venetian sculptures, underwater antiquities, and shipwreck treasures pulled from the seabed by Jack-Yves-Cousteau, etc. Ascend to the roof of Koules to enjoy the panoramic view of the city and its coastline.

Tip: Marina café, across Koules, is one of the few places in Heraklion where you can enjoy a coffee and a snack by the sea.

The heart of the historical centre of Heraklion lies in Meidani. This area which surrounds the iconic Venetian Morosini fountain (or as everyone calls it, the “Lions” fountain), is the place to feel the beat of the city. Around the fountain, there are plenty of cafes, among which the historical Kirkor café and the adjacent Phyllosofies café, both serving the famous “bougatsa”, a traditional delicacy with sweet cream or soft cheese and crispy filo pastry. If your sweet tooth is not satisfied, across the fountain, Gloria café serves mouthwatering sweets as well. At Meidani you can visit the Basilica of St Marcus, currently serving as the municipal art gallery, and then go shopping at Daidalou str., Dikaiosynis str. and Handakos str., all pedestrian-friendly, as traffic is prohibited. You will end up to one of Meidani’s souvlaki restaurants, across Loggia (Heraklion’s town hall) for souvlaki and gyros. 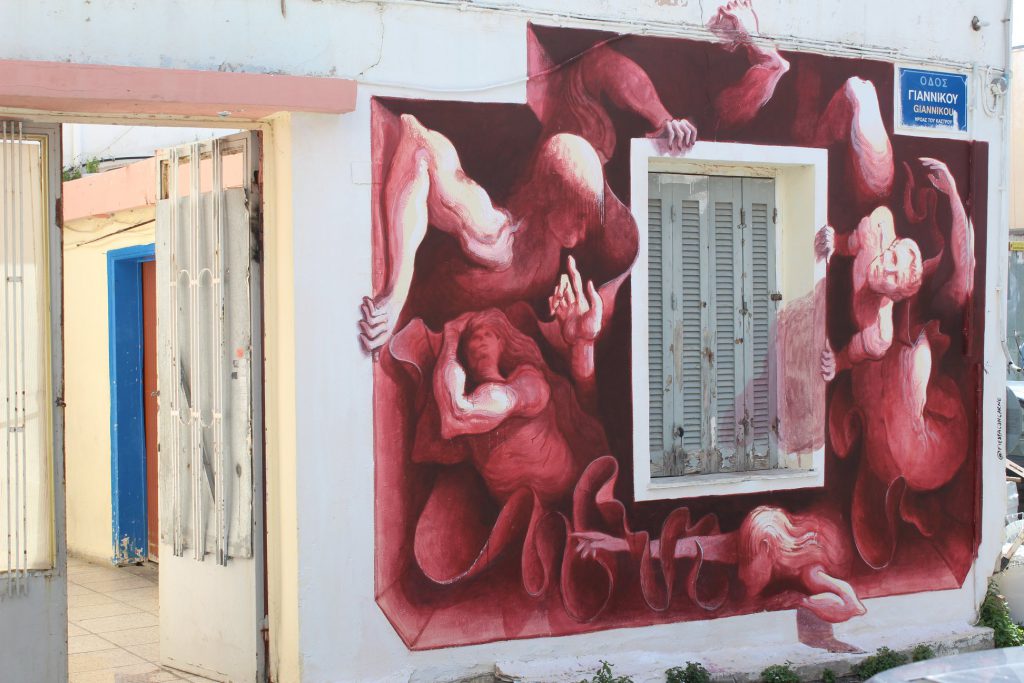 By now you’ve seen plenty of historical monuments and got an idea about the city’s century-old history, but now it’s time to get a taste of contemporary art. Follow the narrow streets across Agios Minas cathedral until you reach the area of Lakkos, one of the few remaining parts of Heraklion’s old town. During recent years, local artists together with artists from all over the world, have created an open-air street-art gallery, painting on derelict walls and transforming abandoned old houses with colours and modern art. Stroll around the narrow lanes that barely fit one car and discover works of street-art at the most unexpected places. At Lakkos, you can dine at the beautiful garden of Vourvouladiko, or have a raki and meze at Lakkos kafeneio.