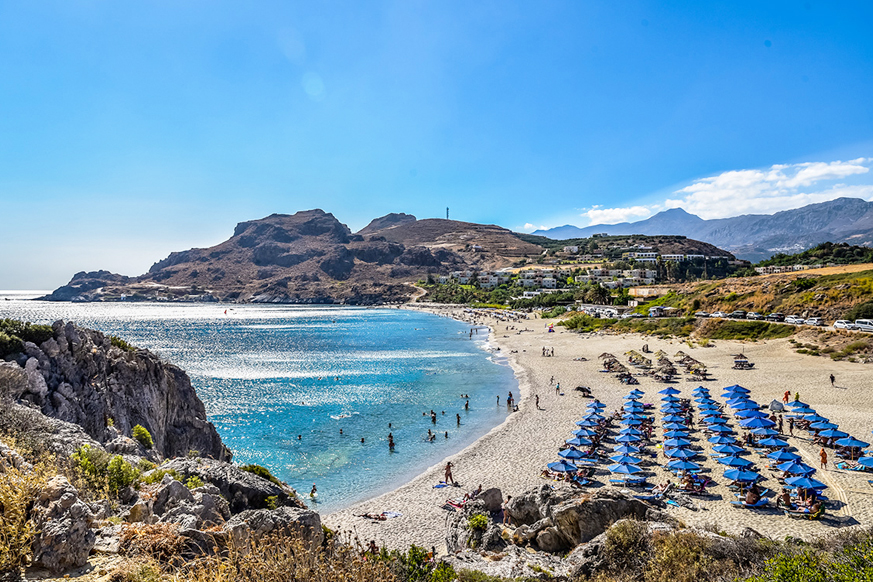 Cradled by mountains to its north and the Libyan Sea to the south Plakias has grown from a tiny fishing village to one of the most alluring visitor destinations in Rethymno province. Chilled and friendly Plakias is the largest coastal development between Agia Galini and Chora Sfakion and has an enticing selection of cafes, bars and tavernas.

History
Traces of life in the area around Plakias have been recorded as early as the Minoan times and the nearby mountain villages of Myrthios and Sellia that look over today’s town were inhabited as early as the 10th century. The first modern-day mention of Plakias was a tiny fishing settlement in the early 1960s, and it wasn’t until the late 1970s and 1980s that tourism development began in earnest.

Life’s a beach
Plakias’s main beach starts near the centre of town and extends east for more than a kilometre, ending at Cape Mouri. Well organised and with sunbeds, beach bars and a few hotels open onto the sands dotted with tamarisk trees. North west of the small harbour lies the rocky beach of Skinos, ideal for snorkelling and beyond that, the family friendly Souda beach. While the town’s distinctive crescent moon -shaped bay has become a magnet for visitors looking to escape the hustle and bustle of more frequented resorts, it’s the even more gorgeous beaches just out of town that stand out.

Favourites of young Rethymniots (locals usually know best) the intimate inlets just east of Plakias (a 5-minute drive away) boast some of Crete’s best sandy strips. Check out Damnoni with sunbeds and good tavernas, as well as awesome water sports, including canoeing, scuba diving, windsurfing and yachting. Nearby are three smaller legendary beaches – each with its own special character – Ammoudi, Ammoudaki and Schinaria. In the summer it’s easy to combine a visit to Plakias, Damnoni and the famous Preveli beach (6km east of Plakias) by jumping aboard a small passenger boat that cruises between each location three times a day.

Hiking
The Plakias area is a hikers’ paradise. Walkers of all abilities can enjoy pristine natural surroundings and can take the numerous marked trails (15 paths at least) that meander through olive groves, orchards and gorges. A favourite climb from Plakias is to follow the trail which leads to Myrthios, 131 meters above sea level where a handful of kafeneios and tavernas offer refreshments and views to die for.

Getting there
Plakias is a glorious 36km drive (on good roads all the way) from Rethymno town and winds through some of the province’s most stunning landscapes. Heading south, the signposted turning right just before Spili, going through Koxare and Lefkogia is recommended (rather than the earlier turning through Sellia). This allows for a truly breathtaking journey through the immense Kourtaliotiko Gorge, one of Crete’s most awe-inspiring gorges.

Five buses a day ply between Rethymno town and Plakias usually during high season and the journey takes 50 minutes.

Previous Post
Stay safe this summer in Crete: all the Covid-19 rules & measures

Beauty begins the moment you decide to be yourself

Stay faithful to the stories in your head 🌞 #t

The Syntopia welcomes guests on a gastronomic expe