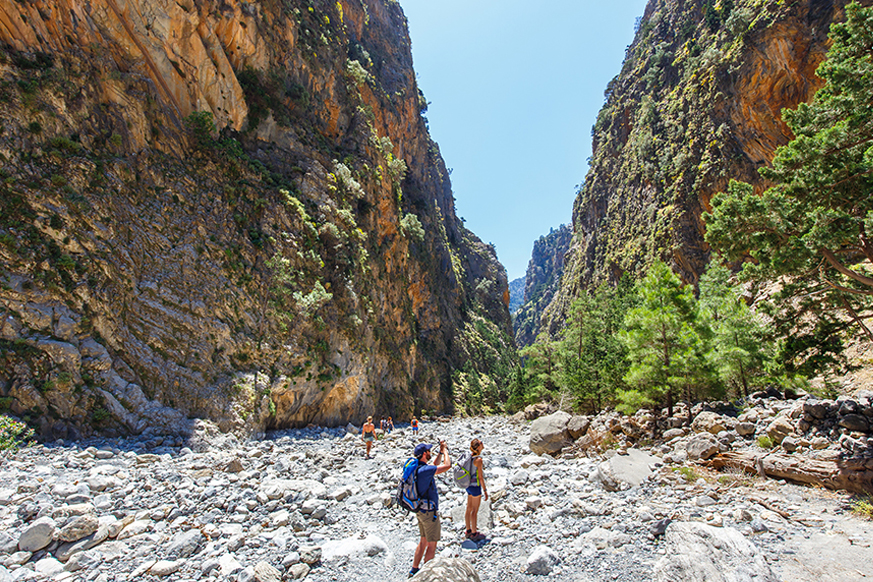 The Samaria Gorge, Crete’s most famous hiking route is a ‘must-do’ for tens of thousands of visitors each year. The most popular months – July and August – will see a thousand people a day file down the 12.8 km gorge. The whole walk is 16km, including the last leg, to the village of Agia Roumeli.

The starting point is Xyloskalo, more than 1200 meters above sea level, and the northern entrance to the National Park of Samaria. Pay the entrance fee (€5) and you’re on your way to an exhilarating, unforgettable experience. Beyond its pristine natural beauty, this is a place of deep history, and when you take this path, you’re walking in ancient footsteps.

The first leg is steep drop along a rocky stone path and it’s probably the most demanding section of the hike. Take care. Going down may appear easier than it is and lot of the accidents in the gorge occur on this two-kilometer stretch. The first designated resting place is Neroutsiko 1.7 km from the start. Way markers at one kilometer intervals are useful to plot your progress.

A little further and you’ve reached the bottom of the valley. Still in shade, you’ll start to crisscross the riverbed for another couple of kilometers. The river, often not much more than a stream in summer, is known as the Tarraios, named after the ancient city of Tarra – today it’s your destination, the coastal village of Agia Roumeli.

Your next rest, the abandoned village of Samaria, is 3.7km distant. Samaria, the half way point, was first settled in Byzantine times, and is today the main resting place for hikers. Continuously inhabited until 1962, (when the National Park was created and the last villagers relocated), for centuries the community here relied on logging the surrounding cypress trees. Loaded onto ships at Agia Roumeli, timber from Samaria was exported as far as Egypt and Turkey.

Around the village, look out for the wild goats known as Kri Kri (officially Capra aegagrus Creticus). Cretans refer to them as Agrimi (the wild one). An endangered species unique to Crete, the horned Kri Kri are a symbol of the untamed Cretan spirit.

Re-crossing the bridge out of Samaria village, soon you’ll be again traversing the riverbed. This is the real beginning of the gorge. And make sure you take seriously of the sign, warning about falling rocks. It’s a real threat. Below the almost vertical cliffs that tower above, this is not a place to stop. Crossing the river on stones or makeshift bridges, depending on your pace, it will take an hour or two to traverse this, the most impressive part of the walk. 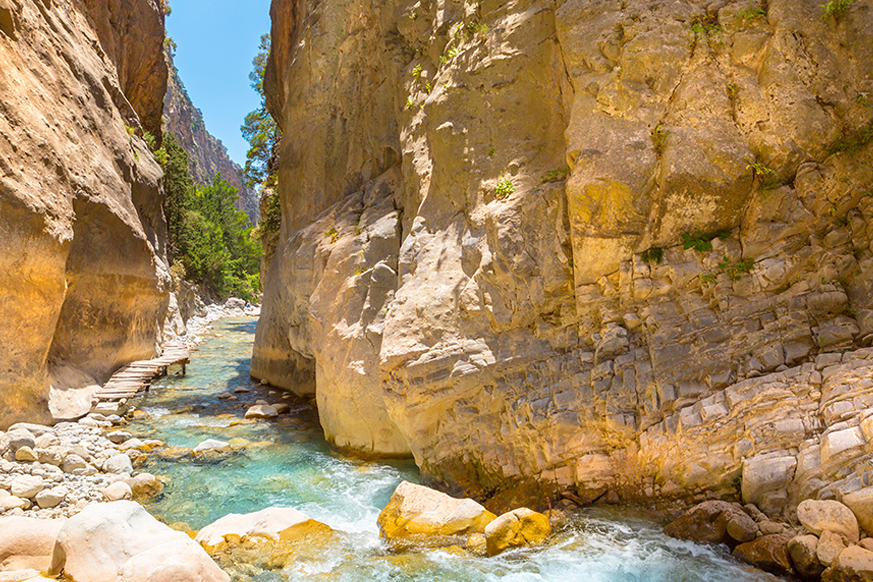 The Gates – the narrowest part of the Samaria Gorge

At the 11 m mark take a pause at the shaded clearing known as Christos; it’s the last natural spring to refill your water bottle. Next up, is the gorge’s most famous and photographed section – ‘the Gates’ – the dramatic narrowest point, where the sheer stone sides of the gorge are just four meters apart, soaring upwards to a height of 300 meters. As you walk through this ancient portal, wonder at the thought of those who, across the millennia, have passed this way before.

With the Gates behind, the gorge widens and after another 2km you leave the National Park. Congratulate yourself; you have walked Samaria. From that point on the path is easy. There are no stones but there’s also no shade. So beware, in high summer exiting the gorge between midday and 3pm will usually mean encountering very hot conditions.

A minibus shuttle has operated in recent years between the gorge’s exit point and Agia Roumeli, if you need it. But hey, you’ve walked 13km, what’s another three?

The National Park of Samaria is closed in winter. It opens in spring, when the national park is open 07:00 – 15:00 daily.

For up to the minute information on the state of the gorge in the case of difficult weather conditions, call the National Park of Samaria office in Chania, 282 1045570.Camping, staying overnight, lighting fires, or swimming in the streams is prohibited. The entire 16 km should take 5 to 6 hours to walk, plus rest times.

Getting back
The Anendyk ferry departs Agia Roumeli at 17:30 and arrives Chora Sfakion an hour later (Fare: €12). The ferry for Paleochora from Agia Roumeli (€17) also departs at 17:30.

Sometimes we travel far from home to reconnect, fi

Syntopia is your playground, a place to gather, sh

Enjoy every moment surrounded by the simple pleasu

Components and principles such as interior design,

When we hold space for ourselves, we allow minds a

A balanced blend of rustic details and modern amen

Trust your intuition and the universe will work wi